Where to buy stuff on a budget:

Where to buy stuff on a budget:

Sometimes it is better to just buy the things we need for our kits. I have provided an annotated listing of merchants and products that I think strike a good balance between quality, authenticity, and price below.

These three starter helms are essentially equivalent. All 3 options are reasonable for the mid-14th century kit that I recommend for garb and armor on a budget. Your decision probably comes down to wanting a bar grill vs. the face plate that is on the Blackbird Armory helm. Obviously Accdntprone's ordering is a little more complicated (you need to send him a personal message), but as far as I can tell from reviews, he makes a good, solid helm. If you're looking for an earlier period helm (spangenhelm), I think Accdntprone also offers those as starter helms.

The Armour Archive is the #1 go-to place for armour questions, buying armor online, etc. The forum has plenty of armour for sale, reviews of armourers, etc.

Mad Matt has a good reputation on the Archive, and offers a good mix of inexpensive armor pieces and much pricier custom work.

Rough From the Hammer specializes in selling pre-formed armor parts. The parts are left unfinished, which means that you'll ultimately need to do the final polishing, strapping, etc yourself.

Greaves aren't required armor for SCA combat, but they can be a really good idea. The lower leg and calf has a fairly complex shape that makes steel armor greaves fairly pricy. Likewise, trying to form your own plastic greaves is also somewhat difficult. Some people use soccer shin guards, as these are a readily available commercial product, however they tend to be somewhat bulky. Field hockey shin guards like these, however are very low-profile.

The most important thing you need to pay attention to is the sizing. You should make sure you get a mask that fits (which is to say it should probably be tighter than you think it should).

Zen Warrior Armory makes really good fencing masks. You might notice I didn't list their cheapest mask, and that's because I think that having a stainless steel mask with a tighter weave is worth the extra money.

The Darkwood masks seem reasonably sturdy. They're priced pretty cheap for a stainless steel mask. All around, they're probably a solid choice.

Both merchants offer a rigid back of head protector for their masks (for Cut & Thrust). Ultimately, if I were just starting out, I'd probably just buy whichever one allowed me to combine shipping with other items.

The Darkwood Armory gloves wear pretty well and at $30 are cheaper than most of the other fencing gloves available. Alternatively, you can use a pair of TIG welding gloves, since they're rather supple and thin to provide manual dexterity. Try to find a pair that is all leather. Any logos or emblems can usually be removed with acetone or rubbing alcohol with a little effort.

Both of these hoods should be completely fine. I'd list Zen Warrior Armory, but theirs are cotton and quite thick, which makes them pretty warm compared to the hemp or linen ones listed here.

Zen Warrior Armory seems to offer the cheapest gorgets that I've been able to find and they provide good protection for fencing. We have a number of them in our loaner gear and they hold up well to the hard usage they get there.

I don't own nor have I seen any of the Anshelm gorgets in person, however, my gorget is made in that style, and I find that it is a bit more comfortable to fight in. Anshelm's price on these ($75) is pretty good, as I can't find anybody else who is selling these for less than $90.

Without explaining in detail, my recommendation at this point for new fencers is to save their money and buy the Darkwood Armory sword first. My experience is that fencers who get reasonably involved in SCA rapier ultimately purchase a DW blade within 2 years, even if they bought another sword first, so why not save up a bit more money and buy the DW?

As far as the price difference, I think ZWA's swords are actually selling for more money than the website suggests (based on my recollection of prices from Pennsic), so I think they come in closer to about $250-$275. I recommend either the R6 or the R9 swept hilt guards, and probably the 40" long sword (which is the longest they offer) with the heavier pommel that is recommended on the website.

As far as Darkwood armory's swords go, pay the extra $10 and get the bated rapier blade rather than the practice blade. You'll probably want either the 42" blade or the 45" blade (if you're around 6' or taller).

Both of the above merchants provide reasonable reproduction shoes. They also both provide various other accessories such as knives, belts, leather pouches, etc. Bohemond's shoes are of higher quality, but I own shoes from both sources and they have all lasted for several years of heavy use (Lilies War & Pennsic + 20ish other events/year).

I recommend most people purchase the additional rubber 1/8" Vibram non-slip sole to protect your shoes from asphalt and gravel, and to provide a bit more grip than the leather sole provides. I do not recommend purchasing the lugged sole that is available from Viking Leather Crafts. It doesn't look particularly good with the shoes and can provide too much traction for combat sports (which can lead to knee injury).

I recommend all of these merchants. They all produce good work, do quite a bit of historical research, and provide reasonably priced pieces (and also some really expensive stuff).

This is far from a complete list, however there are plenty of merchants who offer garb of questionable authenticity for lots and lots of money, so be careful. Revival Clothing and Historic enterprises are essentially the "big boys on the block" so to speak when it comes to buying garb. Their clothes are pretty good, authenticity-wise and they are well constructed. Some in the SCA consider their prices high, but I'd actually say that they offer pretty good bargains considering the amount and level of work that goes into making clothing.

Linen Garb's clothing is fairly basic, and can be used to give a good, generally medieval look. In my opinion, they aren't as authentic as the other merchants, but they're definitely good enough. Their prices are quite reasonable. Ultimately, I think you'll do better trying to build pre 1300's outfits from their garb.

I think I first came across Tailor Made Clothing as a merchant this past Pennsic, but apparently I know a lot of people who wear their clothes (as I know pretty much everybody in the photos). The clothing items pictured are of good quality, and ultimately if the listed prices are accurate, they are under-charging for their work. The downside here is that you'll probably have to wait for your piece to be made, whereas the other three merchants have a sizable inventory, and can probably fill orders immediately.

Fabrics-store.com is my usual go-to recommendation for people who are trying to get into linen garb while keeping the price down. Their linens are about $8/yd, which makes them cheaper than most other sources. However, you'll find higher quality linen at 96 District Fabric, JoAnn's, and sometimes at Carolina Calicoes. If you order from Fabrics-store.com, pay attention to their rotating sales, and use the coupon code "ilovelinen" for an additional 7% off.

B. Black & Sons is a great source for all sorts of wool. You'll pay around $20/yd, but their wool is high quality and they have a fairly wide selection of different kinds of wool.

96 District Fabrics and Carolina Calicoes are mainly available at events. Both merchants set up their shops at Pennsic, and they can also be found at big events along the east coast. Unfortunately, they don't seem to have online shopping set up, but you should be able to place an order by contacting them directly. 96 District has good quality fabrics. Their prices are a few dollars higher than fabrics-store.com's prices on linen (around $10/yd if memory serves). Carolina Calicoes is a little more hit-or-miss, as much of their inventory comes from wholesale lots and auctions, which means that it changes over time. They seem to reliably offer linen around $6 or $7/yd. I haven't worked with their linen much, but it seems to be of ok quality. They usually have a reasonable selection of colors available too. Keep an eye out for them at events, because they often have some unique fabrics and sometimes they have some killer deals going.

Both William Booth and Gray line offer higher quality linen. The price is slightly more expensive. William Booth offer offers a selection of twill tapes, trims, and other notions. Just be careful, as the site is geared a little more towards 18th century reenactors, so some products may be a bit out of period.

Ultimately trim is a bit of a luxury. In order to keep monetary and labor costs down, I won't really offer much discussion on the use of trim to appropriately decorate your garb. However, if you want trim, this is probably your best bet for buying it. They travel extensively, so they may very well pop up at a major event close to you at some point.
Posted by Gawin at 8:30 PM 1 comment: 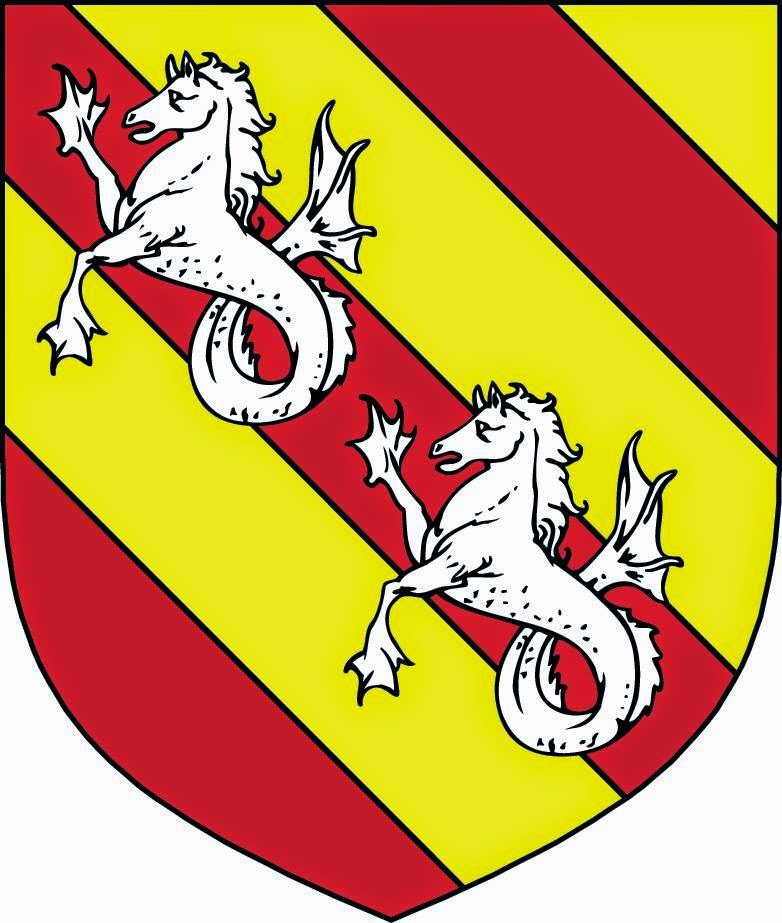